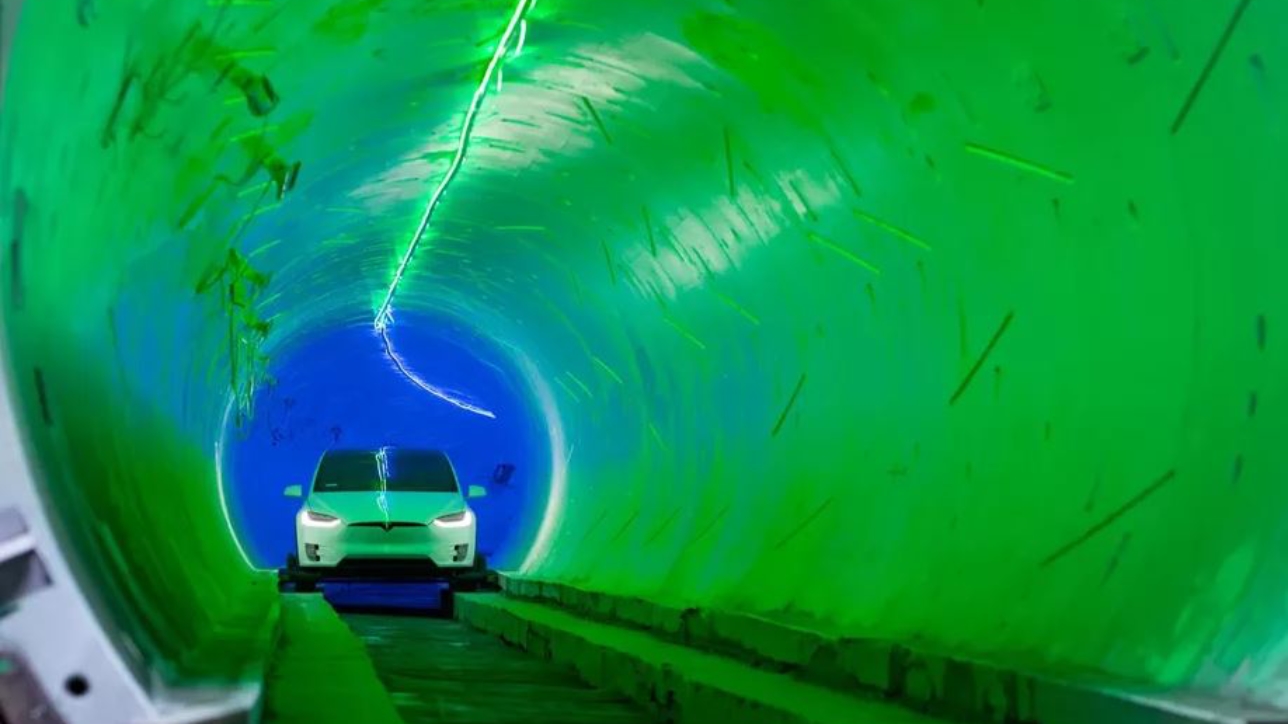 In late 2016, Elon Musk announced, via Twitter, that “traffic is driving me nuts.” His solution? “Am going to build a tunnel boring machine and just start digging . . .” he tweeted.

That tweet led to the eventual formation of the Boring Company. The company, in turn, has a grand plan to build a network/stack of subterranean connected tunnels — known as the Loop — beneath Los Angeles to alleviate congestion. The Loop would carry up to 16 passengers in pods, on skates, that would travel at speeds up to 160 mph.

A test tunnel recently ferried journalists and other officials 1.14 miles beneath Hawthorne, CA. And, news came out in early February 2019, that San Jose mayor Sam Liccardo was in talks with the company about creating an underground link between Diridon Station — the city’s main transit hub — and Mineta San Jose International Airport. Otherwise, there hasn’t been much on the future of the tunnel network, or when it would be ready for public use.

As such, the question is whether the Loop is yet another Musk pipe dream, or if it can become effective reality. While critics continue digging away at the Loop’s challenges, the burrowing technology, itself, is attracting interest.

On Dec. 18, 2018, two years after Musk’s anti-traffic tweet, Boring opened its test tunnel, which runs beneath 120th Street in Hawthorne, connecting Space Exploration Technologies Corp. headquarters to a vacant cabinet store.  The tunnel represents the start of a solution to an issue faced by most major cities: “Soul-destroying traffic,” according to the Boring Company’s website.

But the test drive was a far cry from the visionary idea of autonomous pods, roaring on skates through stacked tunnels at high speeds. Instead, travelers were ferried via a Tesla Model X Tesla, complete with a driver, at speeds averaging 35-40 miles per hour. Perhaps unsurprisingly, even before Musk opened his test tunnel to media and public scrutiny, the project already drew its share of criticism, with the following issues.

CEQA. The California Environmental Quality Act — CEQA — requires in-depth, environmental impact reviews on every construction project in the Golden State, whether it involves going north on a 40-foot tall office building, or digging a massive underground tunnel. Such reviews can take years. “You can have the fastest tunneling machines and the greatest mode of transport, but none of that affects the political or environmental process,” said Joshua Schank with the Metro’s Office of Extraordinary Innovation.

Oil Wells and Earthquakes. Juan Matute, associate director of UCLA Lewis Center and the Institute of Transportation Studies, explained old oil wells and earthquake faults are common below ground in West Los Angeles, another location where Boring might tunnel. Stringent construction rules and maps are in place to prevent an inadvertent methane explosion or earthquake trigger, which could present obstacles to the Loop network.

Property Owners and Easements. Even if the Loop passes environmental and construction reviews, Boring needs permission from public and private property owners to dig beneath their land. Experts point out that, as a private developer, Boring would find it difficult, if not impossible, to obtain necessary easements and permission for below-ground construction.

Traffic Increases. In a supreme ironic twist, experts explained that the Loop could actually create more traffic, rather than alleviate congestion. Limited above-ground space could lead to long lines for travelers waiting to travel underground. Said UCLA’s Matute: “If it’s a four-minute trip from Brentwood to Hawthorne, but there’s a 20-minute line to get into the tube, you haven’t really done much.”

Even amid the criticism, the Loop’s drilling technology is generating interest. The costs are lower, for one thing. Musk said the test tunnel was built at $10 million a mile ,while CityLab’s Laura Bliss said $50 million was more realistic. Even at that price, the cost “would still be a fraction of what comparable projects cost,” Bliss wrote. She went on to say that per-mile costs of transit projects ranged from $170 million (Atlanta’s I-20 East Heavy Rail) to $920 million (San Francisco’s Central Subway).

Boring reduced costs by using machines such as Godot (used to dig a sewer in San Francisco), the faster Linestorm drill and Prufrock, another drill that Boring is developing. The drills run on electricity rather than diesel fuel, which triples their power. Additionally, the drills are remote-controlled, rather than reliant on humans, meaning continuous operation and faster completion times.

As such, while plenty of question marks exist as to the Loop’s viability, the technology behind the project could benefit future transit projects. Potential routes outlined by the Boring Co. follow the major thoroughfares in the city: along the 405 and the 110 freeways between the Valley and Long Beach, with smaller routes connecting the South Bay, Silverlake, Santa Monica and Dodger Stadium, all highly trafficked routes in need of mass transit options – be it through Metro or Boring Co’s tunnels.