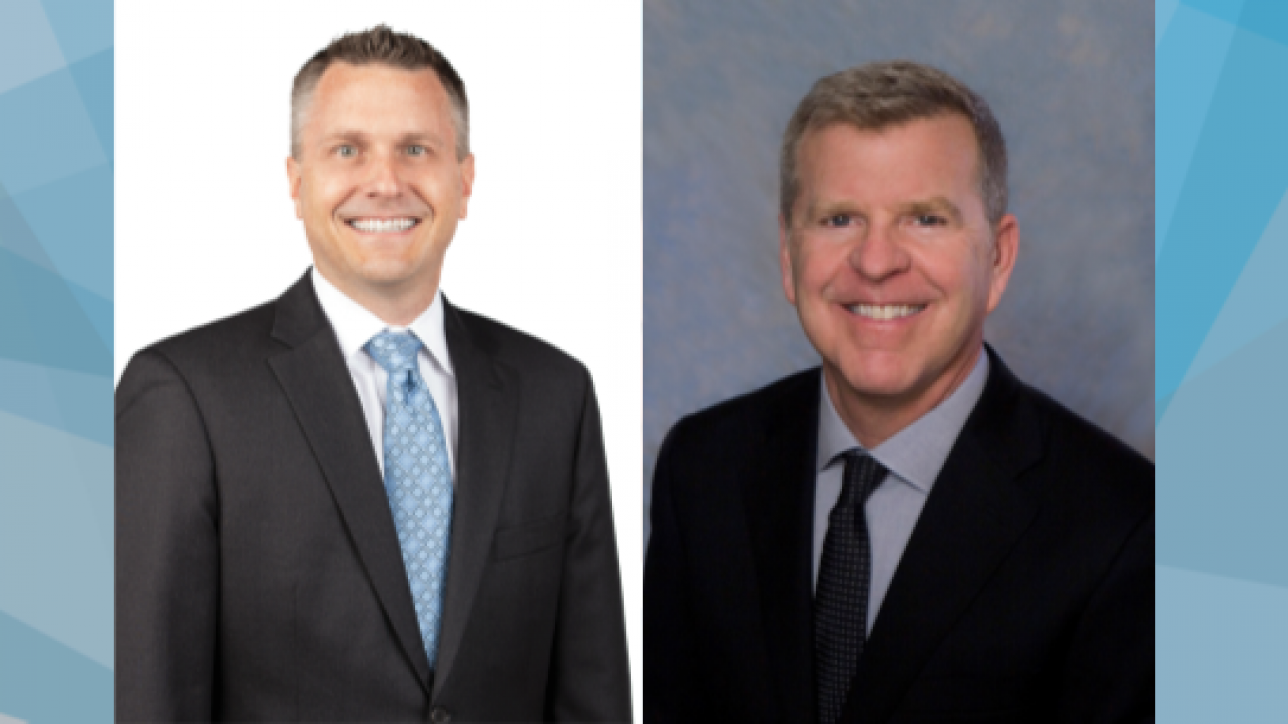 Each year, AIR CRE welcomes commercial real estate leaders into new roles within the organization. The board appointed Jeff Puffer as 2018 President and Executive Chair and two members were installed into new Director leadership positions. Kidder Mathews’ Jon Reno is assuming Co-Chair responsibility for the Technology Committee and Ashwill Associates’ Mitch Ashwill is joining the Forms Committee as Co-Chair.

We caught up with the pair to find out a bit more about their new roles, vision for the coming year, the value AIR CRE provides each, as well as a few highlights of their careers.

Jon Reno, SIOR, CCIM, Senior Vice President and Managing Partner, Kidder Mathews
Jon Reno got into commercial real estate the old fashioned way, through his father who was a civil engineer. That early life exposure to the development business piqued Jon’s interest and led him to decide to become a broker at Heger Industrial in 1999, after a brief, albeit successful, stint as a medical devices sales representative. Ultimately the relationships formed with developers he met growing up helped Reno build a career path into a role running Kidder Mathews’ Central Los Angeles office.

After spending 17 ½ years at Heger, Reno joined Kidder Mathews in March 2017 to help expand the Seattle-based brokerage firm’s SoCal footprint. He says, “first and foremost I am a broker. But as the managing partner for the Central LA office, I am tasked with being a player/coach. That means, I get to mentor younger brokers as they build a career, and be a sounding board for the more experienced brokers.”

A recent noteworthy sales transaction Reno completed was a nearly $50-million deal with Prologis involving a roughly 30-acre site in Downey. The transaction ranked as one of largest Los Angeles County land sales in 2017. The existing 433,000 square feet of industrial space will be redeveloped into a modern facility.

“Development is a focus for me, but the market is so tight that it is hard to get deals done now,” said Reno. “Those deals take time to mature and develop.” That’s because the institutional owners, trusts, and old family interests typically found in Central L.A. own heritage properties. Reno notes, “it requires lots of time to formulate a strategy that will work with their goals, yet that’s the part of CRE I love – putting the pieces of the puzzle together, to convert an older, obsolete site into a modern redevelopment.”

Reno, who joined AIR CRE in 1999, has used his membership to help build his career. Most recently he got involved as part of the broker advisory boards that review, vet and confirm market data for the brokerage community. He believes those quarterly reviews of market statistical information and deals ensures the data is more reliable and complete. That, in turn, adds tremendous value to a broker’s toolbox and is a key aspect that sets AIR CRE apart in the industry.

But beyond the data, which AIR CRE is taking in-house with a new system this year, Reno finds membership delivers multiple points of value. He counts on the access to other brokers, as well as other benefits like the strong role AIR CRE plays in setting standards of ethics and conduct as the de-facto CRE governing and rules body in the region, in addition to what national organizations like CCIM and SIOR provide him.

Near the top of the value equation for Reno though is AIR CRE’s capacity to clear a path for new brokers seeking to build their own CRE career. He says involvement in AIR CRE can play a key role in removing barriers to what is a close-knit industry. That’s because AIR CRE facilitates multiple opportunities all year to meet and network with some of the largest and most active and important owners and operators of commercial real estate. “There likely isn’t a better or easier way for a Millennial to enter into the CRE brokerage business and find friends than to join AIR CRE,” said Reno.

“My dad (Gene Ashwill) was a founding partner of Ashwill Burke and Company. He later became a developer, so I was exposed to a number of aspects of commercial real estate from a very young age. California real estate was a natural fit for me.”

Ashwill says his day-to-day responsibilities include serving as “a principal of our company. I am also involved in leading and mentoring agents and strategic planning with the other principals of our company.” Given that the CRE business is heavily focused on relationships and the ability to close a deal, Ashwill has clearly found a strong fit for his natural skills and personality.

“My favorite part of my job is interacting with clients,” he says. “I have met some exceptionally fascinating people who have made an impact in my life, and I have maintained communication with them long after the transactions have been completed.”

One such deal that reflects how being a people-person helps facilitate transactions involved the marketing of Arcadia Logistics Center. The complex development opportunity was an 82-acre, engineered fill operation of a depleted gravel quarry. The final development culminated with the planning, building and leasing of four buildings encompassing in excess of one million square feet, all of which was spoken for at completion.

Decades of membership and involvement in AIR CRE has provided Ashwill an insiders edge on deals. He notes, that’s because it allows him “unparalleled networking opportunities and also a platform to become more involved in the Southern California real estate community.”

Most recently, he got involved in AIR CRE’s East Region Advisory Board where significant lease and sale transactions are reviewed and the group discusses market data, availability, absorption, and construction. He sees the value in gaining a larger scope of the market and the trends shaping it so that he can better serve clients. All that involvement adds up to an advantage for Ashwill.