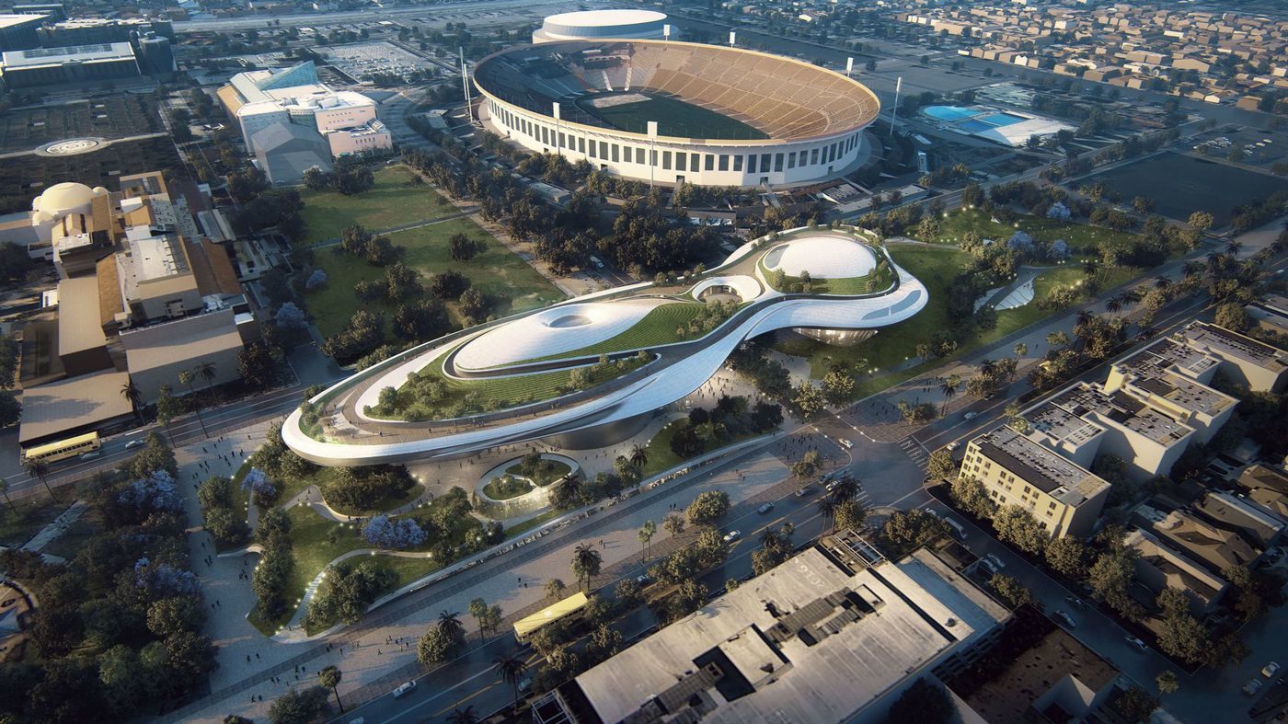 MORE THAN A SPACESHIP: A DEEP DIVE INTO THE LUCAS MUSEUM IMPACT

After years of planning, construction finally launched on the Lucas Museum of Narrative Art. Funded 100% by George Lucas, the museum will be situated on 11 acres at Los Angeles’ Exposition Park, near the University of Southern California’s flagship campus. Ma Yansong of MAD Architects designed the project, which is anticipated to take four years to complete.

And, that’s about all anyone really knows.  A couple of renderings show a building resembling something out of Lucas’ “Star Wars” movies.  Alvin Huang, associate professor with the USC School of Architecture and Principal of Synthesis-DNA knows Ma personally; the two taught architectural studios together in the past. Furthermore, some of Huang’s students are working on the project, in Ma’s office. However, “They are all sworn to secrecy,” Huang said. “There’s a very stringent NDA surrounding this project.”

Even with the mystery surrounding the museum, enough is known for experts to surmise its impact on museum architecture and design, and on Exposition Park and the continued DTLA rebirth. Noted Huang: “This is really the first thing that’s happened in the southern part of downtown Los Angeles. It makes (Exposition Park) that much more of a contemporary destination for museums.”

“Having a museum dedicated to what (Lucas) is dedicated to, and coming to an institution like USC, will help generate a whole new engagement with the public,” added Anthony Morey, executive director and chief curator for Los Angeles’ Architecture and Design Museum (A + D Museum).

Not Your Parents’ Museum

Spaceship shape aside, the Lucas Museum isn’t your standard “box-and-art” locale, or as Morey put it, “one step above an art gallery.” Rather is “an arena safe for investigation and experimentation,” he noted. “It becomes a canvas. What’s interesting about this design is that it’s symbiotic of what his work has done.”

From the rendering, Huang believes the design involves a great deal of complex geometry and parametric modeling. “How they produce this will be a real kind of engineering and fabrication feat,” he acknowledged. “A lot of people will be interested in trying to take down as much about this project as they can.” His familiarity with Ma’s style led Huang to add: “His architectural interests are about trying to merge nature with the man-made,” Huang added.

Another way in which the Lucas museum could differ from others is in its concept of space, rather than things. Morey pointed out that the Lucas museum, as well as the new Whitney Museum in New York, represent ideas of institutions connected to public spaces. What also fascinates Morey about the Lucas museum is the merging of different types of art. “It could be both educational for making a topic prevalent in design, as well as new ways of engaging new means of architecture and film, and how to balance them,” he noted.

Huang agreed that the museum could end up matching and exceeding design trends similar to other SoCal institutions such as The Broad and the Los Angeles County Museum of Art (LACMA). “These are significant landmark projects that have very signature architectural statements,” he said.

Whether the Lucas museum design means future architects will attempt to emulate it, however, isn’t certain. “There have been ideas of developing museums with particular design tokens as a trademark,” Morey said. “But this particular museum comes from aesthetics from George himself, what he’s been working on.”

Certainly, the Lucas museum will generate a great deal of public interest, with an important location. After the concept was teased in San Francisco and announced for Chicago (with politics dooming it in both cities), Lucas selected Exposition Park for the site. The location already boasts many museums, ranging from the Los Angeles County Museum of Natural History, to the California Science Center, to the USC Fisher Museum of Art. Meanwhile, the Broad and Geffen Contemporary at MOCA (as well as the A+D Museum) aren’t too far away, either. For Huang, the proximity of such landmarks is unique. “There are literally eight postcard-worthy projects in this area,” Huang said. “Most cities would be happy with just one or two.” And having the Lucas museum not so far from USC is an added plus. “It will be a landmark building on our doorstep, which will add to Los Angeles’ legacy,” Huang added.

As for Morey, he noted that the Lucas museum fits both its time and location. “Lucas is a story teller,” he noted. “And his museum will be next to one of the most potent movie schools in the country.”

More than a Spaceship: The Cultural Boost of the Lucas Museum May 7th, 2018Maria Verdin