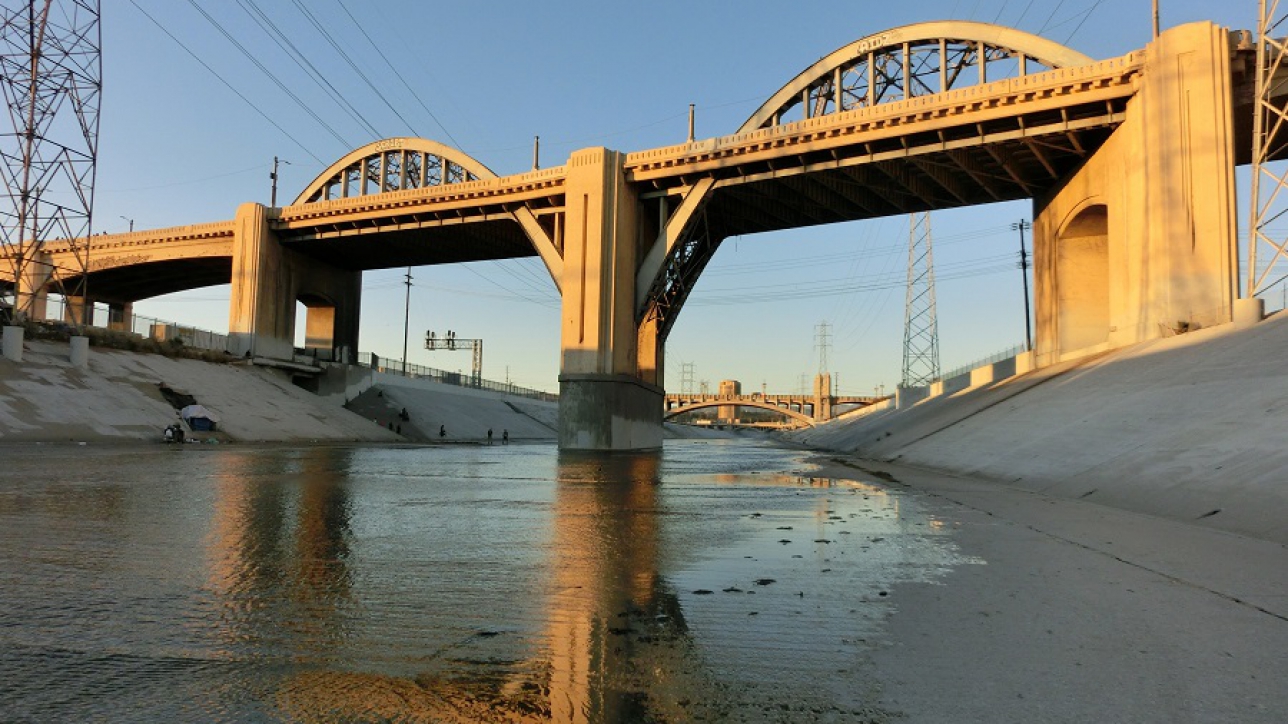 The Los Angeles River, with its combination of pavement and wildlife, stretches 51 miles from the San Fernando Valley to the ocean in Long Beach. In the late 1930s, the river was created as a flood control channel. These days, it’s a waterway, which has captured the imagination of city officials and area developers alike.

In the mid-2000s, LARiverWorks released its Los Angeles River Revitalization Master Plan, which focuses on establishing guidelines for urban design, land use and development, as well as mandates toward environmental and wildlife habitat improvement and water preservation. Of particular interest has been revitalizing the 11 miles of riverfront passing through Los Angeles proper, which will carry a potential price tag of $1.6 billion.

Since that time, Studio-MLA has been asked to develop a 12-mile bike path that would connect Canoga Park with Griffith Park. Architect Frank Gehry has been hard at work on a master plan for multi-use developments on the river banks, as well. And, at some points along the river, new plant life and ecology is being formed, with future plans involving conservation efforts and development of water-oriented habitats.

Furthermore, while much of the river’s renewal has been talk, some of that talk became specific action in 2017.

Taylor Yard G2 Parcel – From  Railyard to Potential Ecosystem Restoration
Taylor Yard is a 247-acre former railyard, of which two miles fronts the river. Situated near downtown, the acreage is directly across the river from Elysian Park (better known as Frogtown), and north of the Arroyo Seco. In March 2017, the City of Los Angeles acquired 42 acres, known as Taylor Yard G2, from Union Pacific Railroad Co.

The land is a brownfield, complete with legacy contamination that will require massive cleanup. But such environmental remediation could restore ecosystems, while providing underserved communities with direct access to the river.

The project is in the pre-design and assessment stages, with the Los Angeles Bureau of Engineering soliciting vendors for an overall implementation plan, site assessments and interim development design services.

Additionally, the revitalization plan’s Project Management Team formed two advisory stakeholder committees, one of which will contain technical members, the other consisting of community stakeholders. A kick-off meeting is scheduled for early December 2017.

Albion Riverside Park – From Dairy Distribution, to Contaminated Site, to Nature
Once upon a time, the Ross Swiss Dairy distribution center operated on Albion Street, along the river. In 2009, the City of Los Angeles acquired the abandoned real estate, then spent years cleaning up and decontaminating the site. In May 2017, construction officially launched on Albion Riverside Park, a six-acre, triangle-shaped site between Main and Spring Streets.

The park is scheduled to open in 2019 with plenty of green space, biking and hiking paths, an improved baseball field and outdoor basketball court, and parking. On the ecological side, Albion Riverside Park will include storm-water diversion and better irrigation. Most importantly, it will provide community residents with better access to the river.

“The communities in (Council District) 1 have been cut off from the LA River for too long. Albion Park, and eventually G2, will provide our neighborhoods direct access to the river, while improving water quality,” said Los Angeles Councilmember Gil Cedillo, who represents the first council district.

AECOM – Pulling it Together
Given the river’s sheer size, it stands to reason that many different entities will be involved with many different restoration projects, potentially resulting in many patchwork developments and little cohesion.

AECOM doesn’t want that to happen.

AECOM’s downtown Los Angeles office recently presented its “L.A. River Gateway” project, with the goal of creating a unified framework for four miles of riverfront acreage running through downtown Los Angeles. The international engineering and design firm developed the framework on its own, though the team has been in discussion with Mayor Eric Garcetti’s office for the better part of a year.

The plan’s main focus is for the Army Corps of Engineers, Los Angeles County and State of California – which collectively owns the property – to form a joint-powers authority. That authority would coordinate and raise funds for new housing, streets and public spaces, while forming partnerships with private developers.

“The river is too large for one entity,” AECOM Director of Strategy Jonathan Dearing told Los Angeles Downtown News.

AECOM’s goal with its River Gateway project isn’t necessarily to win construction contracts for the four-mile stretch. The company did acknowledge, however, that it hopes to work on the 120-acre Piggyback Yard facility in Lincoln Heights, which is near the river, and currently owned by Union Pacific Railroad.