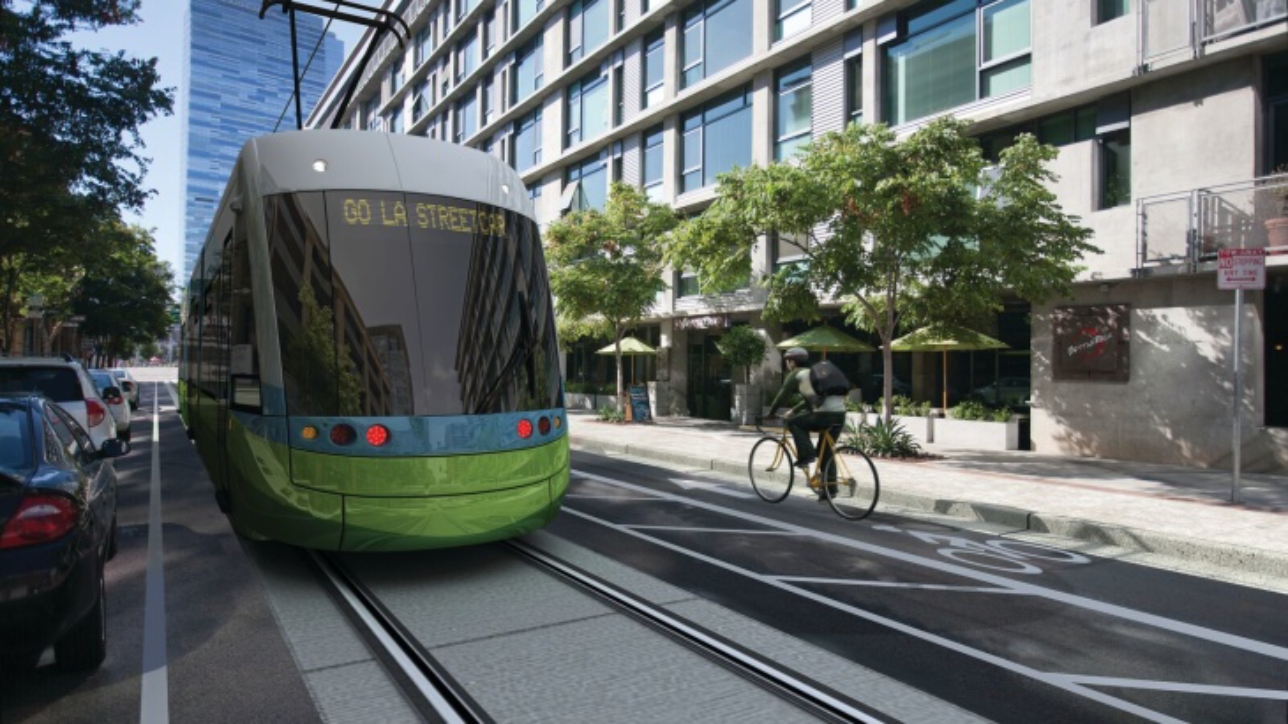 In January 2012, the Los Angeles County Metropolitan Transportation Authority (or Metro) launched its “Restoration of Historic Streetcar Service in Downtown Los Angeles” report. The document detailed how, and why, the city’s streetcar system could, and should, be restored, with a focus on moving people and spurring economic development.

Now, six years later, the Los Angeles City Council approved a $590 million plan for the streetcar program, with proposed funding from federal grants, Metro funds and local dollars. Environmental assessment plans have also been approved. Yet, the lack of forward movement in getting the four-mile streetcar program off the drawing board and onto the tracks continues.

From Streetcar to Auto — and Back

In, 2008, 14th District Councilman Jose Huizar endorsed a streetcar resurgence as part of his Bringing Back Broadway initiative. Spearheaded by the Redevelopment Agency of the City of Los Angeles, the Los Angeles County Metropolitan Transportation Authority, Los Angeles Streetcar Inc. and Metro, the program’s goal was to “reintroduce streetcar service to Downtown Los Angeles” in an effort to tie together downtown neighborhoods and the regional transit network.

A growing infatuation with the automobile, combined with increased suburbanization and regulation and funding changes, was the streetcar death knell. Buses replaced streetcars, then autos replaced buses.

Close to a century after the streetcar heyday, the city wants to try again. Councilman Huizar indicated the project is “shovel-ready,” pointing out that the transport is “ready to help the region meet our transportation as a first-mile, last-mile solution . . .”

Additionally, real estate developers and investors like the idea. Streetcar-adjacent properties have a certain cache, while giving the appearance of mobility. In reality, while streetcars add a dash of romance to a central business district, they are more useful as tools to spur economic development, something that downtown Los Angeles is already experiencing.

Right now, environmental plans for the proposed streetcar are completed, and a proposed route set, starting at Hill Street, then traveling along First, Broadway, 11th, Figueroa and 7th. Proponents indicate that, if construction starts in 2019, the system could be operative as early as 2021.

Funding is a huge issue, however. The streetcar has been added to the Measure M transportation project list. It is, however, on the plan’s third tier, meaning money won’t be available until 2053. Multiple attempts to obtain grants from the Federal Transit Administration have failed. Finally, property owners on the proposed streetcar route are willing to cough up as much as $65 million in taxes. But, that can only happen when, and if, the project launches.

While city leaders have extolled the virtues of a streetcar taking care of gridlock and moving people around downtown’s 23 stops at a high speed of six miles per hour, others question this assertion.

In a recent  op-ed piece, the Los Angeles Times noted that city leaders are committing half a million dollars to “build what amounts to a glorified bus,” which is not a good use of “precious, limited transportation funding.” The article also said that the pricey, slow-moving trolley prevents consideration of better transportation options.

Meanwhile,  StreetsBlog L.A.’s Dana Gabbard said that many attending the Aug. 2 Environmental Assessment for the Downtown L.A. Streetcar Project public hearing were staunchly against streetcar resurgence. Cost was a factor. Additionally, the economic development argument didn’t wash, with many pointing out that downtown Los Angeles is already undergoing regentrification without a slow-moving streetcar in its midst.

Finally, LAist pointed out that “most Angelenos don’t seem to care” about a proposed downtown streetcar, given the delays and funding shortfalls.

Then there is another major consideration. Namely, that an updated version of the streetcar would be “beset by the same problems that killed the original streetcar,” LAist noted. It would operate down the middle of streets. It would be subject to the same congestion and gridlock as other traffic. In other words, it doesn’t seem to be an efficient way to move Angelenos through the downtown region.

The current streetcar program’s next steps are uncertain. However, unless funding can be solidified and a reasonable timeline introduced, it’s likely that the L.A. streetcar will remain firmly entrenched in the annals of history, rather than being used as a modern-day transport method.