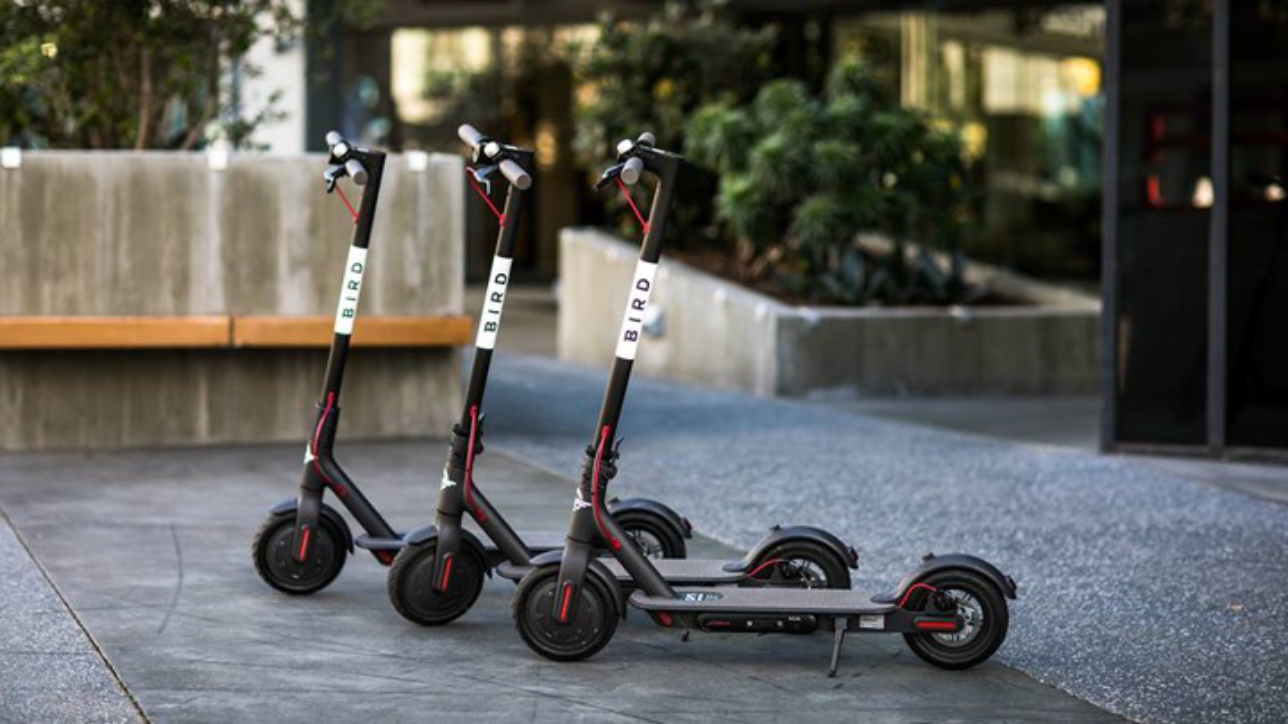 So how do these electric scooters work? First, you must download the app and input your payment and driver’s license information. Then, using the app, you can see where the available scooters are parked on the map. Simply, walk up to a scooter, scan its barcode and then it unlocks and starts charging you. Scooters cost $1.00 to unlock and then you’re charged per minute. Once you have completed your ride you leave it on the sidewalk using the kickstand (or anywhere that is not impeding traffic, etc.) and then you “lock” using the app. The scooter is now available for other people to “unlock” and ride.

Since they are electric, when the battery is run down, they need to be charged. Scooters that have low battery won’t let you unlock them, and you can see the amount of charge left when you click the icon for the scooter. The scooters are charged every night. People, cleverly coined as Lime Juicers and Bird Chargers, sign up to go out and pick up the scooters from all areas of town. They bring them home and then charge the scooters by plugging them into wall outlets. Then, in the morning, they put them out on the sidewalks nearby so that riders can continue using them. These people get paid by the scooter companies based on the number of scooters they charge. Lime Juicing and Bird Charging have become a popular new side business for many millennials looking to make extra money.

What it Means for LA

The electric scooters intend to alleviate Los Angeles’ infamous traffic and smog problems, which leave the SoCal streets extremely crowded. These companies want to ensure future generations have access to a cleaner, healthier planet. “L.A., unlike other cities, has a public transit system that is not really used that often. The train doesn’t always correspond with where you’re going. Whereas if you have this scooter at all these stops, the first mile last mile problem is solved. Lime scooters intended to solve the missing piece when it comes to access to these stops.” A Lime spokesperson said. “Our community is so dependent on cars; and our product promotes short distance traveled and every car we take off the road is less carbon emissions in the air, less carbon used and less traffic congestion.”

Bird, a dockless electric scooter company based in Santa Monica, CA. has grown immeasurably since its introduction in 2017. The company, now headquartered in Venice, CA, was founded by former Uber and Lyft executive, Travis VanderZanden on the premise of making transportation better and more environmentally friendly. As of August 2018, the electric scooter market has become increasingly more competitive with the introduction of Lime and Spin (not based in SoCal). But due to the immense growth of these companies and the newness of this technology, riders and city officials alike don’t know how to properly use and regulate this product. So how do companies ensure that their riders are following company regulations, rules of the road, and make sure that they are being conscious of those around them? With any new technology it takes people a certain amount of time to adjust. “We are very proactive in making users abide by our rules. We are taking action by working with local cities like Santa Monica and using our app to constantly remind our riders of our rules such as using helmets and having only one rider per scooter.” Said a Lime representative. “We also are doing in person events to promote scooter safety and educate our riders of the proper and respectable way to use our product. The goal is the same, to alleviate carbon emissions and traffic, and our scooters can be a part of the strategy.

Not All Fun and Games

However, not all of these actions are regulating riders’ behavior and scooter etiquette. Residents of Beverly Hills are complaining about the visual pollution caused by the electric scooters. Riders have been leaving scooters in inconvenient places, such as in the middle of sidewalks or in front of driveways and doors. The electric scooters have also posed danger to pedestrians as many SoCal residents have experienced riders disobeying traffic laws, injuring pedestrians.

To this extent, cities, including San Francisco, have placed a halt on electric scooters without permits to limit the visual pollution and dangerous effects of the scooters. Similar discussions are in place in SoCal. Beverly Hills has followed suit and has banned Bird scooters and other dockless electric scooters for six months, until city officials can create safety and accountability regulations for them. The city will strictly enforce these scooter regulations, punishing those who violate them. If police officers catch someone riding or leaving an electric scooter in Beverly Hills, they could impound it and impose a fine. It is unclear how much the fine for riders will be, but the scooter companies will have to pay $172 for each scooter on the street according to city spokesman Keith Sterling.

However, these permits are in place in order for cities to gather data on the environmental and congestion aspects of electric scooter usage. A Lime spokesperson said, “It’s interesting with Lime, since we’ve only been around for a about a year, much like our other competitors. This [electric scooter] is a fairly new technology. Some cities have taken an approach of shutting them down, unlike Santa Monica where they issue a pilot program where we share the data we collect with them.” This pilot program allows Lime to operate as they are while sharing critical information with the city. A Lime spokesperson stated, “We track where are most people using the scooters, and from this data we can make decisions about them. From this data, city officials can consider putting a bike lane in heavily trafficked areas or if people are making left turns frequently issuing a left turn light.” Essentially, this program accomplishes the same goal while letting the scooter companies operate, which is a very convenient solution for both Lime and the public. In addition to the pilot program, the city of Santa Monica is starting to give tickets to those who are riding the scooters on sidewalks.

So, what’s in store for the future of electric scooters? Both Bird and Lime, two of the major players in the competitive electric scooter market, have recently received major funding from private investors such as Uber, Alphabet Google, Sequoia Capital and other Silicon Valley venture capital firms. They have gotten about $300 million (Fortune). and $335 million (Business Insider) respectively. With titan-like investors, the future of the electric scooter market is looking lucrative. These companies have been around for little over a year and are valued in the billions. Electric scooters are available in over 80 markets around the country. “The end goal is to transform the way that people get around. It’s an issue that people in California deal with in our car dependent, heavily freeway and traffic-oriented environment to one running on clean energy and placing more emphasis on public transit,” said a Lime spokesperson. “Electric scooters are the solution for green, more livable spaces and less emphasis on long commutes.” Only time will tell if electric scooters prove to lessen the traffic congestion in the streets of sunny SoCal.