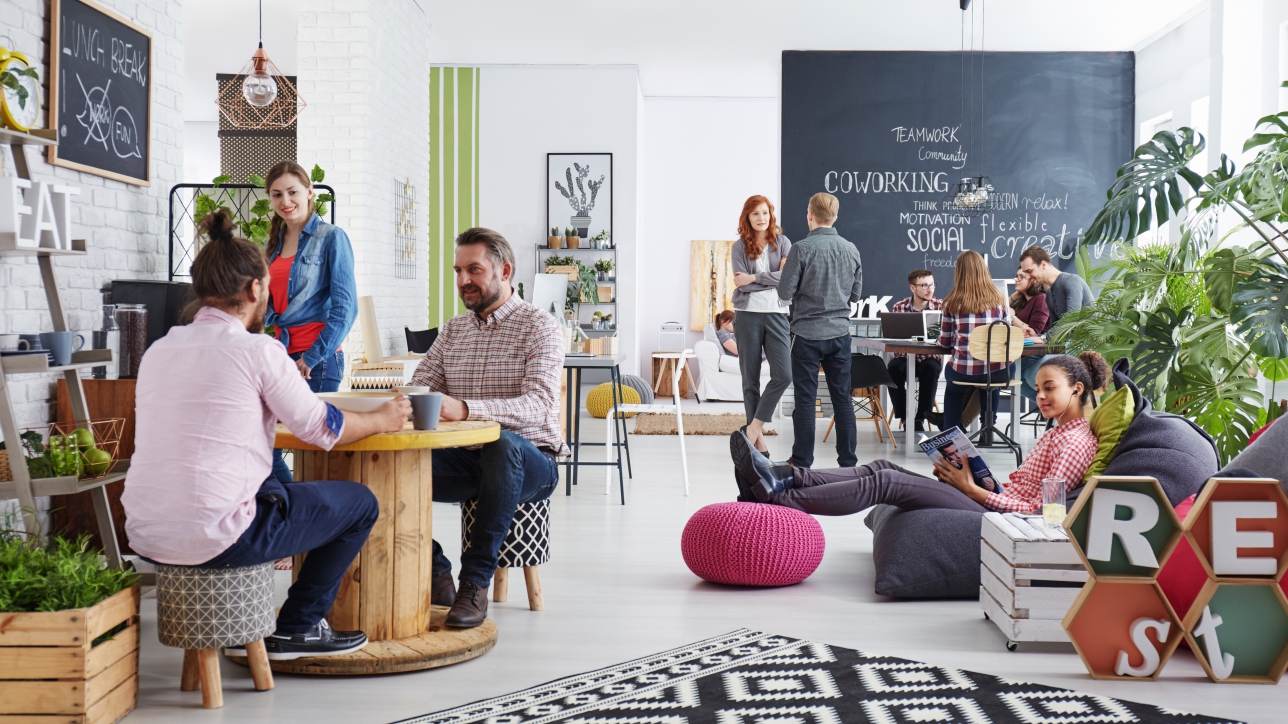 THE TRUE DEFINITION OF CREATIVE OFFICE

Office design has undergone a huge shift in the past half-century. The modern office has morphed from corner offices, open spaces and desks, to “cubicle farms,” then back to open spaces, sans the corner offices in many case.

One of the more recent office design shifts is being dubbed the creative office. Once the purview of cool and hip technology firms and marketing agencies, the creative office is becoming more mainstream as companies use it as a tool to recruit and retain younger workers.

Though it seems as though creative office is mentioned just about everywhere, the challenge is trying to define what it really is.

Mention “creative office” and what might come to mind are huge rooms, scattered work stations, collaborative areas and lounges, complete with brightly colored walls, and possibly concrete floors. Moving through this space are young millennials with tablets and smartphones, who might be wearing earphones as they listen to music.

There is more to the creative office than painted walls and concrete floors. The concept tends to be identified by:

With this definition, just about any office could be considered “creative.” Painting a wall bright green, or moving a ceiling tile or two could constitute a creative office. Carle Peirose, a partner with real estate services firm Industry Partners in Santa Monica, indicated that, while that growing interest in the creative office movement is great, it’s becoming more difficult to truly define the concept. “It’s getting hard to tell what is creative,” he said.

At the recent AIR CRE Forecast 2018 conference, Peirose indicated that Industry Partners has separated the creative office product into three “traunches.” These are:

True Creative, encompassing the entire creative experience, from collaborative spaces, to natural lighting, to flexible floor space, to intelligently grouped work stations, to on-site amenities. Examples of such spaces can be found in the CalEdison building in DTLA, as well as the refurbishment of the National Typewriter Co’s building in Santa Monica (where J.J. Abrams has his production company).

Creative Light, which offers one or two attributes from creative office space. Peirose said that creative light could be minimal – such as painting a bright color onto a wall, or more in-depth – which might include natural lighting and work group settings.

Soft Creative, a concept that combines newer Class A office space with “some of the creative experience,” Peirose said, going on to say that this category is showing promise, especially in downtown Los Angeles. “I think there is a lot of legs to it,” he observed. “It’ll find itself over the next couple of years.”

Though the design of office space is very important when it comes to the creative aspect, one large differentiator between traditional office space and its creative counterpart is the human element. We mentioned above that companies have been shifting office designs in an attempt to attract newer, younger talent. Because millennials and the up-and-coming Generation Z use technology for everything, and want to be connected no matter where they are, part of the creative office mandate requires connectivity, whether employers are working from the lobby, the building’s outdoor café, or remotely, from home.

Peirose, in saying that the human element will end up being a unifying factor across the creative office type, also indicated the importance of amenities. These can include a concierge experience, in which a dedicated building employee arranges services for tenants, from dry cleaning, to car washing, to bike repair. Some amenities are also moving into interesting areas, such as doggie daycare and rooftop cabanas.

Another important human element aspect, what Peirose called “the last little piece,” is friendship. In other words, a tenant is more likely to lease, or renew in space, if a friend is in the building. “Building communities have been behind the biggest successes of creative office,” Peirose pointed out.

Communities, technology and design are important parts of today’s creative office. And, as these attributes continue changing, so will the creative office design.