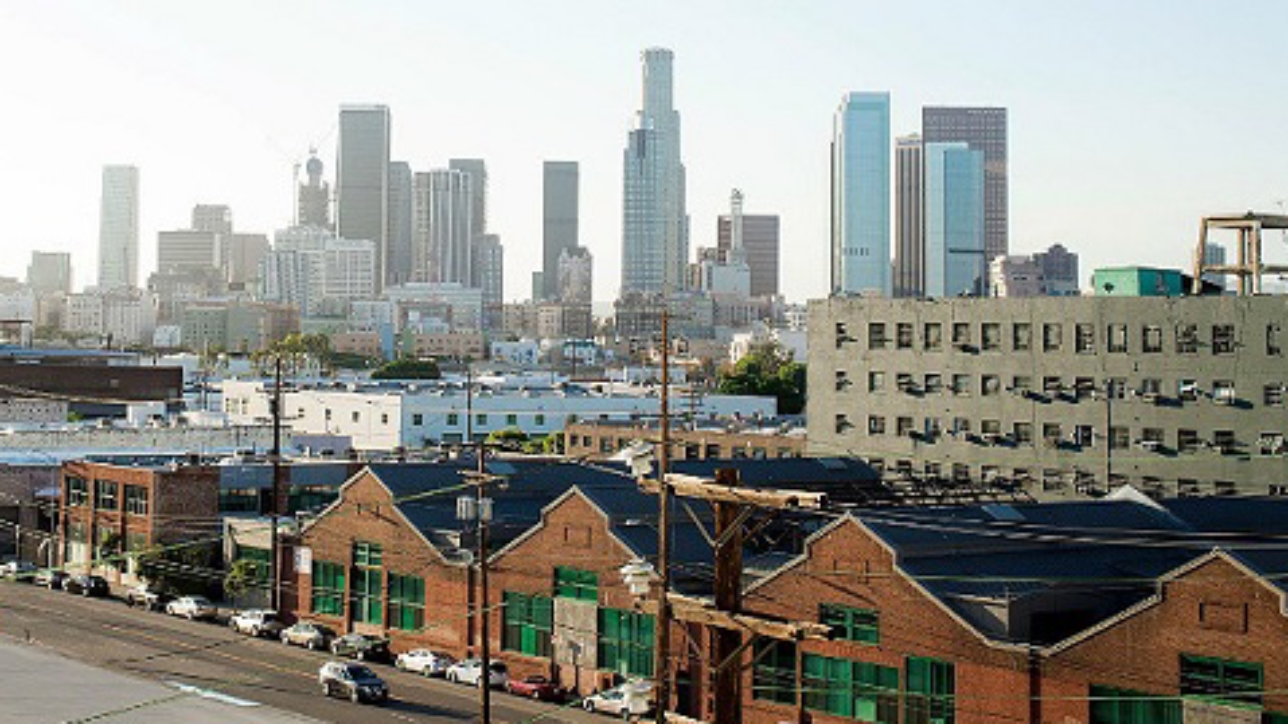 Downtown Los Angeles is booming, from Little Tokyo, to the Fashion District, to the Arts District. The latter encompasses three square miles on DTLA’s east side. Since the late 2000s, the area has changed, becoming a trendy locale, complete with museums and cafes, creative workspaces and lofts, and boutique restaurants. More development, apparently, is to come, with The Real Deal pointing out that “there’s nearly one major project in the pipeline for every two blocks of Downtown’s Arts District.”

Though gentrification can be welcome in many cases, some wonder if current and future real estate projects could cause the Arts District to lose its artists — and its character.

From Industrial, to Artists’ Enclave, to Unknown

Bounded by Alameda, Atlantic, the Los Angeles River and Interstate 10 to the west, south, east and north respectively, the Arts District shifted from vineyard to a factory and warehouse district in the late 19th and early 20th centuries. During the mid-20th century, manufacturers and others departed, leaving behind empty buildings and urban decay.

Then came a group of artists in the 1970s, who had been priced out of Venice and Hollywood. The artists took over many of the crumbling buildings, and invested a great deal of sweat equity converting them into live/work spaces. The city of Los Angeles paid attention to this trend, and, in the early 1980s implemented the Artist-in-Residence program, which “legalized the residential use of formerly industrial buildings for artists,” according to the L.A. Conservancy.

In recent years, the neighborhood began attracting other developers. Art critic Allon Schoener commented that migration from suburbia back to the urban core, combined with generational lifestyle and living changes, is leading the Arts District to become “one of the hottest real estate markets in the country.”

Meanwhile, planned projects such as SunCal’s mixed-use 6AM (1206 E. 6th St.), 520 Mateo and 668 Alameda are anticipated to add more than 5,000 residential units, along with a plethora of creative office and retail space to the Arts District, assuming that everything announced is completed.

In other news, Spotify leased 110,000 square feet lease at 555 Mateo St., in a massive mixed-use development known as At Mateo. The company will relocate its 120 employees to the Arts District in 2019. Other office tenants already in place at At Mateo include Soylent and the University of Southern California’s Roski School of Art and Design.

However, as gentrification increases, so do concerns that Arts District artists could be priced out of the area they worked so hard to rebuild.

One example is the Santa Fe Art Colony at 2421 S. Santa Fe Ave. Fifteen Group acquired the property in June 2018, with plans to upgrade the units to luxury status. However, the problem for those who currently live there is rents are anticipated to increase by 13%-82%, which is unaffordable for many of the artist tenants. Tenants at 800 Traction experienced similar issues.

The situation has led publications, such as L.A. Magazine, to comment that “the Arts District is in danger of losing many of the artists who transformed the neighborhood into the destination it is today.” L.A. Curbed went one step further, asking whether the Arts District should still be referred to as such, when artists can’t afford to live there anymore.

One bright spot is neighborhood advocates and developers agree that the Arts District needs to retain the artists. The city of Los Angeles is considering an affordable housing program geared toward artists. Additionally, groups including Affordable Housing for Artists are pushing for regulations focused on setting aside affordable units for artists in new developments. One project, Hillcrest Co.’s 1800 E. 7th St., will include affordable housing and studio workspace, which many at the AHA consider a “hopeful sign auguring a return of artists to the Arts District.”

The other bright spot is that the artists, themselves, are defending their slice of DTLA. They’re showing up at city council meetings, launching protests, and generally making themselves heard. Whether these actions will help keep artists in the Arts District remains to be seen. However, the fact that “artists are learning new ways to . . . confront the politics of gentrification . . .” as the American Prospect Magazine put it, brings awareness to the challenges of gentrification.

In short, development in the Arts District is important. However, it also needs to ensure that the area’s character is maintained.

Can the “Arts” be Kept in the DTLA Arts District? December 4th, 2018Maria Verdin